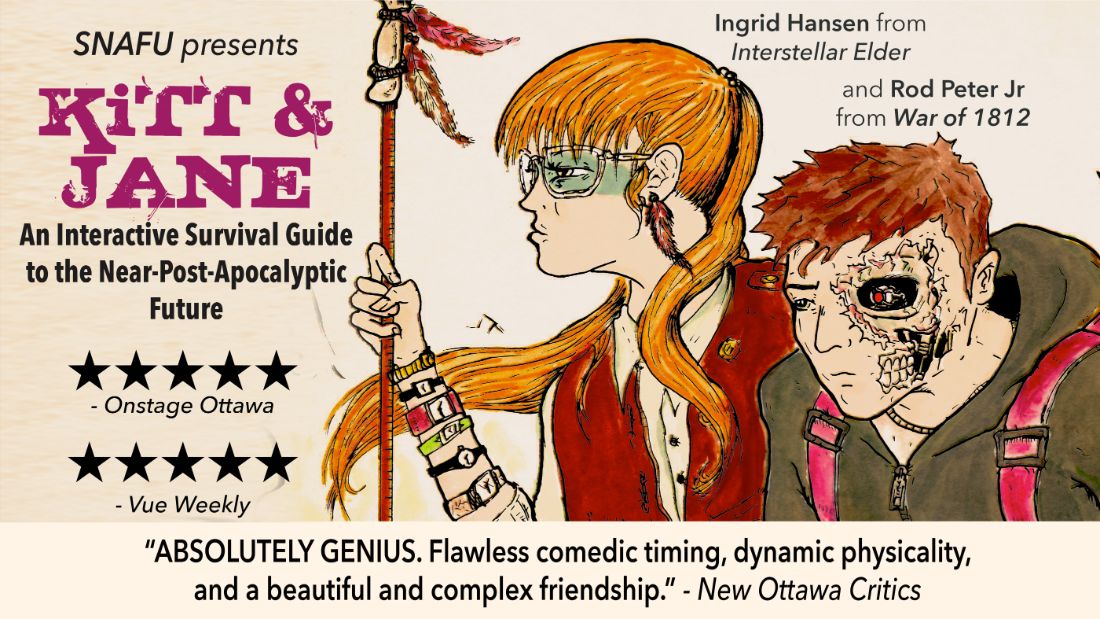 The show begins: two grade-eights presenting to the audience, purportedly as part of a school assembly.
Very soon, the students go off-script, barring the doors and hijacking the presentation
to deliver an important message:
They will be dead in an hour,
the apocalypse will occur in five years,
and they’re here to train you how to survive.

What follows is “a wild, impressively choreographed romp featuring dance numbers and live music
that is by turns hilarious, heart-rending and in small glimpses, beautiful. . .You won’t want to leave your seat.” – The Marble.  At the heart of this show is a poignant exploration of the world today’s youth are inheriting, and what they’re prepared to do about it.
“The whole story makes a smart and funny blend of environmental activism and adolescent awakening, and emerges as one of the most joyous and unforgettable theatrical experiences you could hope for.”
- The Visitorium

“Hard to resist… Fearless use of projections, live music and some rather bold physical comedy, alongside a closeness to the audience that can only be described as genuine, unscripted and undeniably charming
… A tightly-woven, well-paced piece, that has maintained its charisma and a sense of spontaneity.”
- Monday Magazine
For Adults & Youth Age 10 +
70 minutes, no intermission
~ Shadow Puppetry ~
~ Video Projection ~
“INCREDIBLY TALENTED DUO.” - Hush Magazine

“You won’t want to miss this one.” - Pat Donnely, The Montreal Gazette

“Once in their world, expect to be taken on a journey. This is no passive experience.  Kitt and Jane looked at the world around them, how we’re handling things like sustainability and climate change,
and have concluded that the world (as we know it) will end in five years.
ALMOST TOO MUCH FUN and too many laughs for one show to handle.” - OnStageOttawa

"Kitt and Jane's genius lies in the ability of the creators to craft a story that has simultaneously
​tapped into young people's concern and anxiety about the state of the world
​while reminding their elders of a simpler more playful time.” - LaCouvee Arts

“We are living in an insane time and it's evident as they sing 'Children Leading The Revolution'
…clearly there is something very powerful here.”
- The Charlebois Post

“GET A TICKET WHILE YOU STILL CAN!
Outsider Kitt is in 9th grade and she’s found a worthy partner in a socially anxious boy named Jane.
During a school assembly on salmon, the two hijack the auditorium. They face death at the end of the hour and want pass on some crucial advice about surviving the pending apocalypse. With the same break-neck pace of Little Orange Man, Jane and Kitt use music, shadow puppetry, and diagrams to trace their startling discovery about themselves and the future as well as offer advice for the survivors. Being in the presence of these
two very lovable and unique characters for 75 minutes feels like a life-changing experience.
​Their can-do-attitude and visible flaws make them role models for being oneself.”  - Montreal Rampage

As research, SNAFU artists have been interviewing classes of high-school students in Victoria asking about their visions of the future of the planet, the apocalypse, utopia, and what they would be prepared to do to survive a crash.   SNAFU is compiling interviews with real live teenagers to create the podcast series
“A Teenager’s Guide to Surviving the Apocalypse,” available for FREE on our podcast page.
​

Kitt & Jane: A Survival Guide to the Near-Post-Apocalyptic Future
With the success of Little Orange Man, The Belfry Theatre invited SNAFU for the 2012 Incubator Project to create Kitt & Jane. The piece then won the New Play Prize, which included a year’s worth of dramaturgical support from the Playwrights Theatre Centre, and continued development with the support of the BC Arts Council.
In 2014 after a cross-canada tour, the University of Victoria presented a two-week run of Kitt & Jane for their Alumni series. In 2018, Kitt & Jane is undergoing a new writing and development phase that culminates
in a premiere at the Revolver Festival in Vancouver, with the support of the Capital Regional District
​and the Canada Council for the Arts.

We would like to thank everyone who donated to the Kitt & Jane North American Tour !
With your help we were able to tour our show to seven cities across Canada and perform for thousands of people in Montreal, Ottawa, Toronto, Winnipeg, Calgary, Edmonton, and Victoria.  We met artists from across Canada and all over the world, and built new connections for future creative projects.
​Thank you so much for your love.